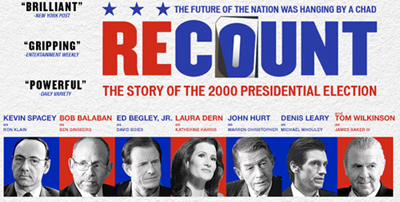 Recount is a 2008 television film about the 2000 United States presidential election. The political drama was written by Danny Strong, directed by Jay Roach, and produced by Michael Haussman. It premiered on HBO on May 25, 2008. The DVD was released on August 19, 2008.

Recount chronicles the 2000 U.S. presidential election Bush v. Gore case between Governor of Texas George W. Bush and U.S. Vice President Al Gore. It begins with the election on November 7 and ends with the Supreme Court ruling, which stopped the Florida election recount on December 12.