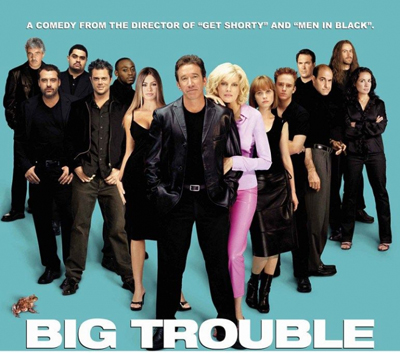 Big Trouble is a 2002 American comedy film based on the novel Big Trouble by Dave Barry. It was directed by Barry Sonnenfeld and featured a large cast including Tim Allen, Rene Russo, Dennis Farina, Zooey Deschanel, Sofia Vergara and Jason Lee. Like much of Dave Barry’s fiction, it follows a diverse group of people through a series of extremely strange and humorous situations against the backdrop of Miami.

In a high-school game of “Killer” (in which a student must shoot another with a squirt gun), Matt Arnold has to “kill” classmate Jenny Herk, and decides to sneak up on her at home. By coincidence, hitmen are also there to assassinate Arthur Herk, who has secretly embezzled money from his company, Penultra Corp. When the fake assassination attempt crosses paths with the real one, police officers Monica Romero and Walter Kramitz are called out to the resulting disturbance. During the chaos of the assassination attempts, Matt’s friend, Andrew, called Eliot Arnold, Matt’s father. Upon arriving to pick up Matt from the Herk’s, Eliot immediately feels a mutual attraction to Anne Herk, Jenny’s mother, as Matt and Jenny begin to feel attracted to each other as well. The Herk’s housemaid, Nina, meanwhile, falls in love with a young homeless man named Puggy, who lives in a tree on their property, after she runs from the shootings and he saves her from the hitmen.

← America’s Most Wanted In Her Shoes →