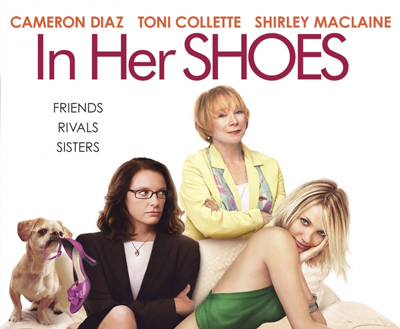 In Her Shoes is a 2005 American comedy-drama film based on the novel of the same name by Jennifer Weiner. It is directed by Curtis Hanson with an adapted screenplay by Susannah Grant and stars Cameron Diaz, Toni Collette, and Shirley MacLaine. The film focuses on the relationship between two sisters and their grandmother.

Maggie (Cameron Diaz) and Rose Feller (Toni Collette) are sisters with nothing in common but their shoe size. They were raised by their father Michael (Ken Howard) and stepmother (Candice Azzara) after their mother Caroline died in a car accident. Rose is the eldest; an ostensibly plain and serious lawyer who is protective of Maggie despite her flaws. Maggie is a free spirit who is unable to hold a steady job (due to her virtual inability to read) and turns to alcohol and men for emotional and financial support. Rose grudgingly allows Maggie to move in with her in her Rittenhouse Square apartment in Philadelphia when their stepmother throws her out of the house. Their already difficult relationship ends, however, when Rose catches Maggie in bed with Jim (Richard Burgi), her boyfriend. Maggie subsequently disappears from Rose’s life.